[Can B2C sales alongside conventional retail be beneficial for all parties, asks Will Jones, housewares director for the British Home Enhancement Trade Association

Of all the home and garden sectors, housewares is the one which has seen the most rapid growth – and most significant impact – of internet sales.

Notwithstanding the firm prediction that growth in this area is set to level off somewhat as the destination potential of brick and mortar outlets, such as garden centres and cookshops, spearhead some degree of fight-back, thereâ€™s no denying that the world has moved irrevocably towards online.

Instead of lamenting this, is it in fact time for both suppliers and retailers to reconsider some of their original suspicions of going B2C?

Some traditional housewares retailers blame online sales direct to the consumer for all the woes of the High Street â€“ possibly overlooking the impact of two significant other issues –  rates rises and parking restrictions.

Nevertheless, itâ€™s understandable that suppliers who sell direct to consumers via their own internet sites or via the big internet retailers while also seeking to maintain their relationships with traditional retailers are sometimes viewed with suspicion.

Is it possible to â€˜run with the hare and hunt with the houndsâ€™ and be fair and supportive to all channels? Is it possible to enable the success of all kinds of retail partners at the same time â€“ and simultaneously achieve success going direct?

The idea is still contentious. Retailers fear undercutting on pricing or other inequitable practices, which might in effect turn them into handy showrooms while the actual sales go elsewhere. Suppliers worry about alienating their longstanding retail customers.

As a result, the last few years have seen numbers of somewhat disingenuous â€˜best of both worldsâ€™ strategies some of which are still in existence.

From supplier websites under invented brand names, to discount-only sites, to ordering sites that credit sales to the retailer where the product was first viewed â€“ they often look like tortuous ways of trying to square a circle.

With online sales established as a consumer norm, and the cleverer bricks and mortar retailers reinventing themselves as destination stores with their own internet sales alongside, I think this whole subterfuge approach is being discredited and a rethink on B2C could well be a good thing.

So, BHETAâ€™s February 2018 forum featuring Rob Ingram from Root 7 as one of its speakers was particularly refreshing. Root 7 supplies innovative glassware and barware to retailers like John Lewis, Lakeland, and Steamer Trading.The company also sells direct to consumers from its own site and via Amazon.

Speaking to BHETA members, Rob provided a generous insight into the trading of his own business and he made the case for B2C sales alongside conventional retail as beneficial for all parties. Not only did he show suppliers why direct B2C alongside B2B is viable, but also how conventional retailers can benefit from working with suppliers who also sell B2C.

Interestingly, a mainstream internet retailer at the same event endorsed the potential of the Root 7 multi-channel approach as beneficial to sales through all channels â€“ the marketing benefits of B2C creating more of a benefit than a threat to other more traditional forms of retail.

For those not already on board with that thought, it could be a good time to reconsider.

Tramontina teams up with Walmart 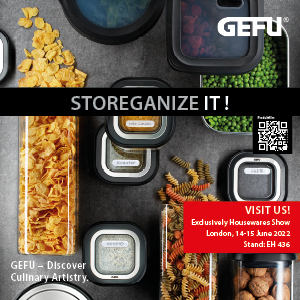